Bose-Einstein condensation (BEC) was theoretically predicted by Satyendra Nath Bose and Albert Einstein in 1925 using arguments based on the statistical properties of indistinguishable particles [1,2]. This was experimentally realized in 1995 in a dilute gas of Rubidium atoms cooled to 170 nK, by Eric Cornell and Carl Wieman at the University of Colorado [3]. Meanwhile, for superconductivity the order of events was the reverse, with the experimental discovery preceding the theory.  In 1911 Heike Onnes found that cooling mercury to temperatures of 4.2 K caused an abrupt drop in the resistance to zero [4].  For superconductivity, a microscopic theory was formulated b John Bardeen, Leon Cooper, and John Schrieffer in 1957 [5,6].  Their theory of superconductivity is now known as the “BCS theory”, taking the initials of the three discoverers.

Historically, BEC and superconductivity were considered two completely different phenomena.  At first glance, even the particles that enter the theories are completely different: for BEC we need bosons to see the phase transition, while superconductors deal with weakly correlated electrons, which are fermions.  However, in 1968 two Russian researchers Leonid Keldysh and A. N. Kozlov found that the BCS wavefunction can in fact describe both the quantum state for BECs and superconductors [7].  This remarkable fact points out that both these effects are two aspects of the same phenomenon.  In hindsight, we can view superconductivity as a kind of BEC that occurs in the Cooper pairs of electrons.  The most distinctive feature of superconductivity, that of zero electrical resistance, can then be viewed as a superfluidity of Cooper pairs.  Since Cooper pairs possess a charge of 2e, a simple applied voltage can transport them through a material with zero friction, resulting in superconductivity. 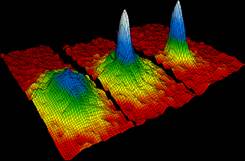 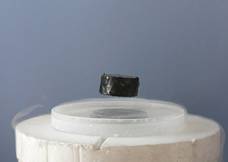 Keldysh and Kozlov originally studied the problem of excitons at high density, so here we will follow their example, although the BEC-BCS crossover can really apply to any kind of fermionic system with attractive interactions.  An excellent account of the exciton BEC-BCS crossover is given in Ref. [8], which is highly recommended for further study.

Consider first a dilute gas of excitons, which are a type of elementary excitation in a semiconductors (see also the page about exciton-polariton BECs).  Since electrons are negatively charged and holes are positively charged, when these particles are both present it is energetically favorable to form bound pairs, which we call excitons.  This is of course assuming they do not recombine with each other, which they do eventually, with a photon being emitted from the semiconductor.  Typically the lifetime of an exciton is in the region of 1 μs to 1ms [CHECK].  Thus if we look at timescales that are shorter than this lifetime, we can think of excitons are being stable particles, just like atoms or electrons.

Since excitons are composed of an electron and a hole (which are both fermions) these form a bosonic particle, like Hydrogen.  In fact, the wavefunction of an exciton has exactly the same form as Hydrogen, but with a Bohr radius that is much larger, about 10 nm in GaAs. If the temperature of this system is cooled far enough, we can directly use Einstein’s arguments and expect that a BEC will be formed.  Although theoretically this is reasonably straightforward, experimentally this is a very challenging problem, with a large experimental effort dedicated in trying to realize this.

Figure 2: The BEC-BCS crossover for excitons.  At low density the excitons are strongly bound and pairs and a BEC forms in the excitons.  At high densities the electron hole wavefunctions start overlapping and a BCS phase is realized.

What happens as we increase the density of our exciton BEC? This is the problem that was approached in Ref. [7,8], using mean field techniques.  The kind of mean field theory that was used is exactly the same kind as that used in the BCS theory of superconductivity.  Thus it is not surprising that ultimately the same quantum wavefunction as BCS theory described the exciton problem we are trying to solve, as superconductivity.  The wavefunction that they used had a form

This wavefunction is exactly the BCS wavefunction, except that instead of electrons of opposite spin, we consider electrons and holes instead.

What they found is that as the density is increased, the wavefunctions between the electrons and holes became increasingly less bound together.  The reason for this is due to screening of the electron-hole Coulomb attraction.  As there are more and more electrons and holes, all the Coulomb forces become increasingly screened, and thus effectively weaker.  This means that the exciton wavefunctions start to grow bigger and bigger, until they all start to overlap with each other. Once the wavefunctions overlap, it becomes less clear which electron is paired to which hole.  This kind of loosely correlated state is exactly what a BCS state is, which explains the similarities between the two cases (see Figure 2).

We have seen two extremely limits of excitons: a BEC at low density and a BCS state at high density.  What happens in between these two extremes? The answer to this is somewhat undramatic: nothing in particular.  The fact that a single wavefunction (1) can describe both the BEC and BCS phases means that we can continuously change the BEC state into a BCS state.  No abrupt phase transitions occur separating these two extremes.  This is exactly why the phenomenon is called a “crossover”.  This is interesting in itself because it tells us what we claimed in section 1: that the BCS state is actually deeply connected to BECs.

Experimentally, there has been a quite an effort to realize the BEC-BCS crossover, mainly using cold atoms [9].  In atomic systems, it is possible to vary the interaction between atoms by applying a magnetic field on the atoms, a technique called Feshbach resonances. By exploiting this, it is possible to vary the attractive interaction between atoms from very strong to very weak.  This is an equivalent way of inducing the BEC-BCS crossover, in addition to the density variation method given in Fig. 2.

3. The BEC-BCS crossover with exciton-polaritons

Several theoretical works have tackled this problem, and the answer is that it seems like it is indeed possible.  A theoretically predicted phase diagram from Ref. [10] is shown in Figure 3. It is predicted that as the density is increased, the polaritons transition first from a polariton BEC to a BCS-like state, then finally to a photon BEC state.  This can be understood in the following way.  Starting from low density, excitons and photons are in a coherent superposition and form a BEC at sufficiently low temperatures.  As the density is increased, screening due to electrons and holes weakens the Coulomb attraction binding the excitons, and a BCS-like state is formed, particularly for blue detuned excitons.  As the density is increased further, due to the phase space filling effect, only photons may be excited in the system.  At high densities, the overwhelming population of the photons dominate the system, and a photon BEC forms in the high density limit.

In Ref. [11] we have used a BCS wavefunction approach to analyze the system, analogous to the wavefunction (1) for polaritons.  Several characteristic experimental features were calculated, such as a Mollow triplet type photoluminescence (PL) spectrum and the peak PL transitioning between the lower polariton energy energy to the cavity photon energy as the density is increased.  We have also calculated the 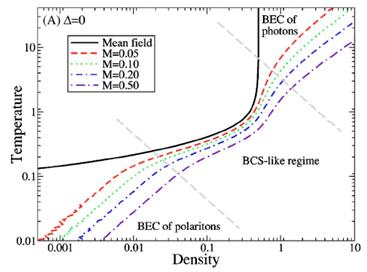 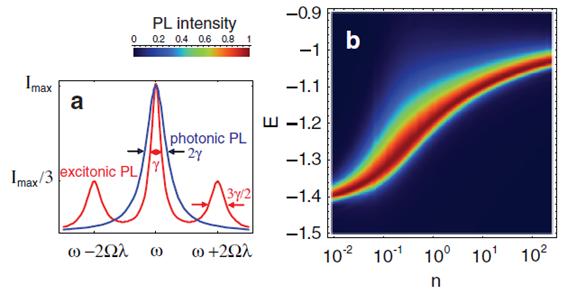